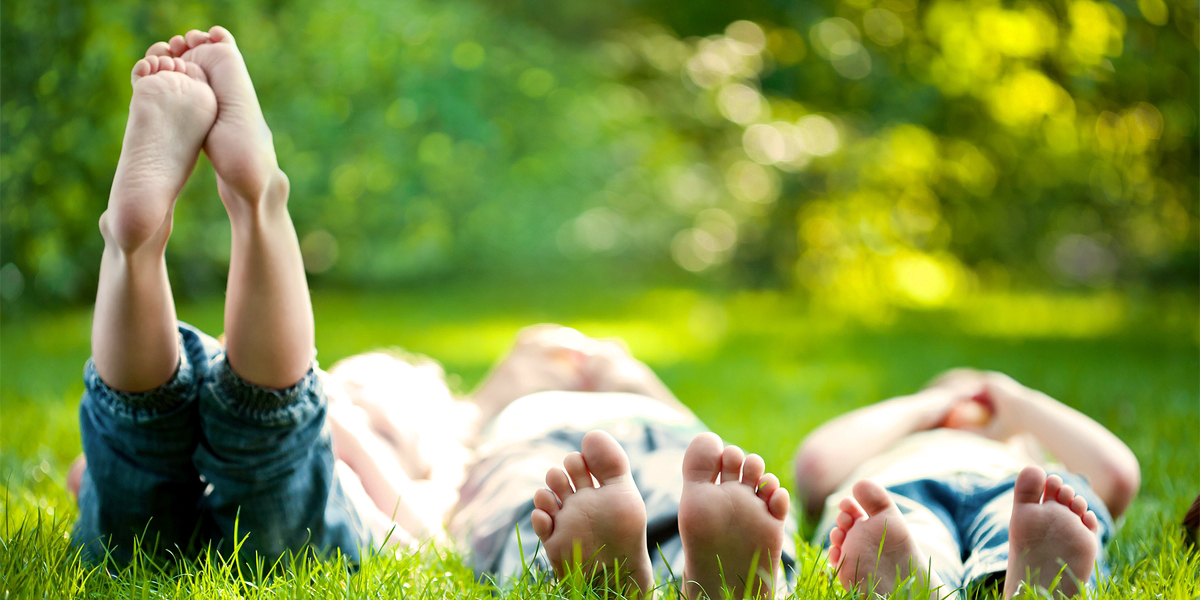 DAEBO Group has actively shared profits we have earned with our neighbors in need based on the philosophy of the founder, Dung-kyu Choi, who always believed 'profits of an enterprise must be used for those who need help'. By generously sharing with our neighbors, we bring warmth to life. 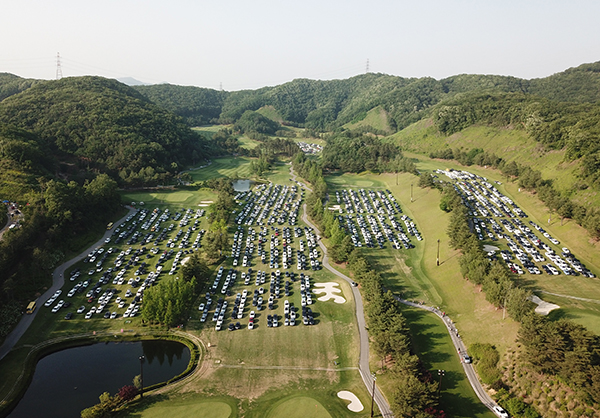 The east course fairway, Seowon Hills,
turned into a parking lot for the charity concert

Working together
to make a better world

Seowon Valley Charity Green Concert is part of our social contribution efforts, which is held on thefairways with Korean K-Pop stars by Korean Wave stars. The golf fairways and bunkers turn into a playground for children and parents and a parking lot (9 holes).

On the day of the charity concert,
the profits from a charity bazaar and
sales of Food, are donated to Love Wheelchair, Paju Orphanage, and Gwangtan-myeon.

An audience of 45,000 gathered
at the fairway for the charity concert 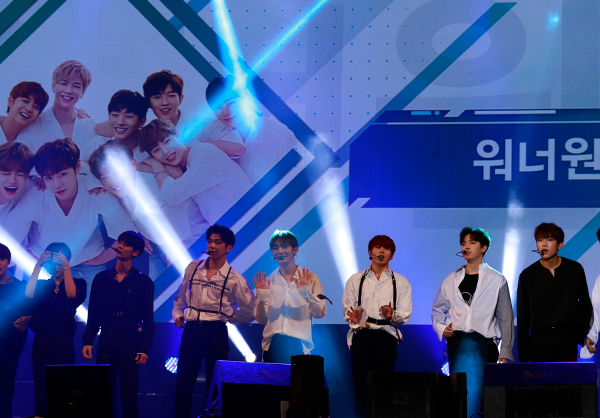 Wanna One donating their talent
to the charity concert in 2018

Green Concert has contributed to building
community cohesion and encouraging the public
to have a positive view on golf, and is visited by
K-POP fans from all over the world such as China, Taiwan, Japan, the Philippines, the USA, and Iran.

In order to join the efforts to help our neighbors in need, numerous Hallyu stars donated
their talent to the charity concert, including
Wanna One, BTS, iKon, PENTAGON, EXID, Girls Day, gugudan, MOMOLAND, Dong-ha Jeong, Jo-han Kim, Tae-wu Kim, WAX, and so on.

Korea's only charity concert held at a golf course, Seowon Valley Green Concert, is held on the last Saturday of May every year. 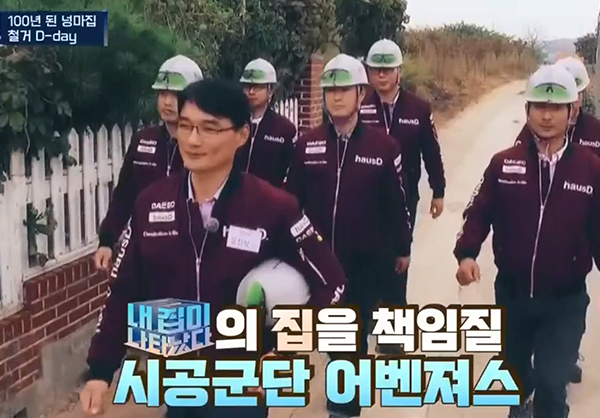 Bring warmth
to life and the world

DAEBO Group is offering not only financial support but also talent of each affiliate, including human/material support, for our neighbors in need. For instance, we open the green lawn to the public and the fairway for a parking lot during the Green Concert.

Particularly, in 2017
we donated talent to 'My House Appeared', a renovation TV show
by JTBC for neighbors
who have poor residential environment.

Based on expertise and experiences in building
more than 30,000 apartment units, DAEBO Engineering &
Construction removed old houses and provided
new places to live for 8 months in Ganghwado, Yeoju, Dongducheon, Paju, and Boeun for people who shared their life stories with viewers. 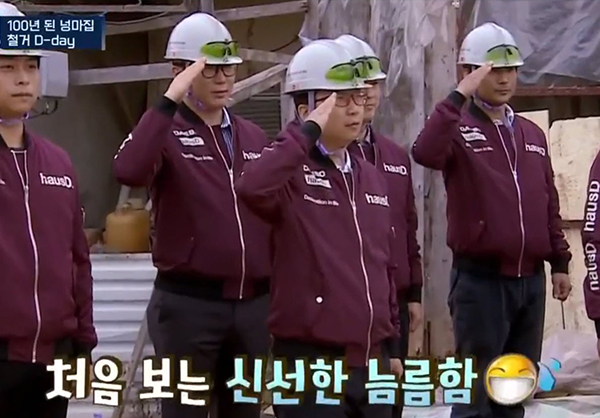 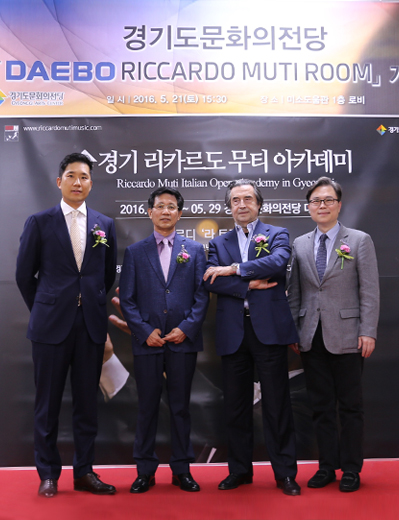 In 2016, as part of our social contribution activities, DAEBO Engineering & Construction remodeled a waiting room of Gyeonggi Arts Center, Suwon, into the Daebo Riccardo Muti Room for the visit of Riccardo Muti, the world's famous conductor and music director of Chicago Symphony. Currently, the room is used by great masters of classical music before performances.

Seowon Valley Country Club has offered to
hold a wedding ceremony every year free of charge for couples
from multicultural families in tough financial circumstances. 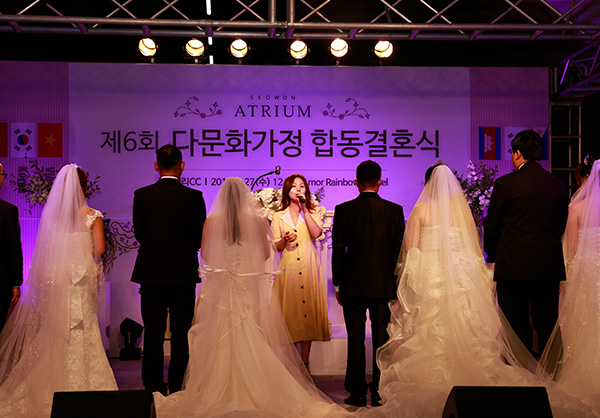 Amorrainbow Tunnel, a landmark facility of Seowon Hills South Course, is provided as
a place for weddings.

For six years up to 2018, a total of 25 couples had their wedding ceremony, and we have promoted childbirth by offering a university scholarship to the third child of a couple who tied the knot at the Club.

In this way, DAEBO Group has generously supported individuals and groups in need, including the local community, persons with disabilities, multi-cultural families, and artists. 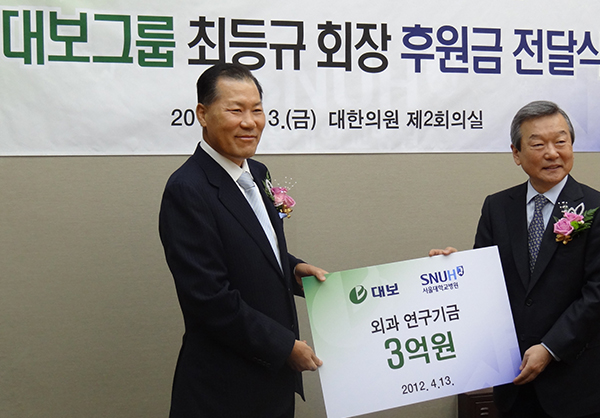 Help young ones
and our neighbors
to achieve their dreams

DAEBO Group has provided scholarships to local schools and villages in the country. For example, we built a study facility, which cost nearly KRW 2,100 million for Daecheon High School, Boryeong, Chungnam, and contributed KRW 300 million to Seoul National University for development of medical technologies.

The affiliates of the Group, including DAEBO Engineering & Construction, DAEBO Communication & Systems, and DAEBO Distribution, have helped victims of traffic accidents on expressways and their family members. In an effort to provide financial support for a child who has lost a parent due to a traffic accident or persons with disabilities and their children, we donate to the scholarship foundation operated by the Korea Expressway Corporation. Up to now, we have contributed KRW 500 million to the foundation. 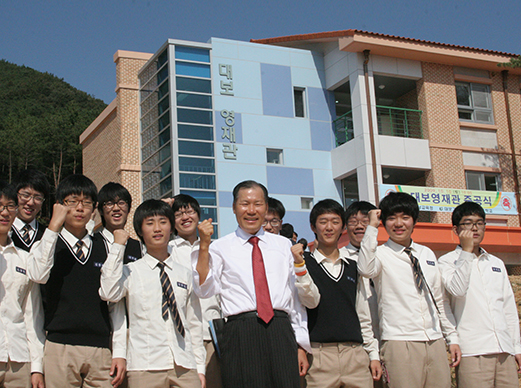 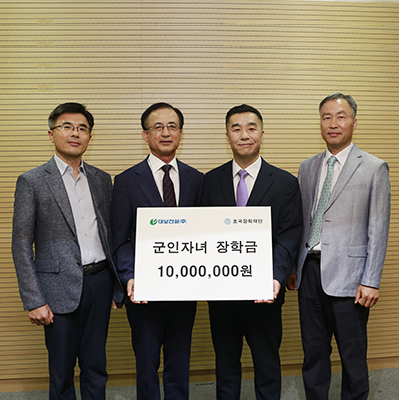 Particularly, DAEBO Engineering &
Construction is supporting children of soldiers
so that they can concentrate on their military duties.

After signing the agreements in 2017,
the company has donated to M.N.D.
Hoguk Foundation and Hanmin
High School.

The Hoguk Foundation aims at easing the burden of tuition
for a solder's family and providing a scholarship
to children of soldiers on service and civilian military employees.
Hanmin High School, established in 2014, is a boarding school
that ensures stable and secure educational environment
for children of soldiers. 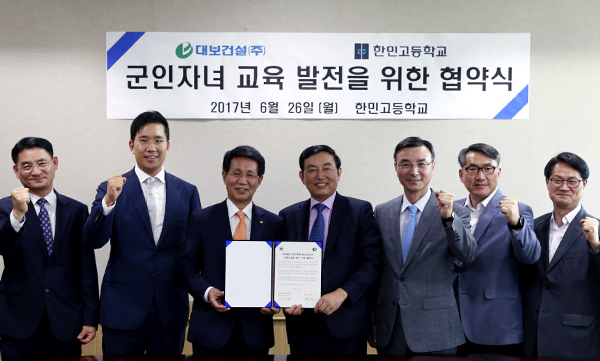 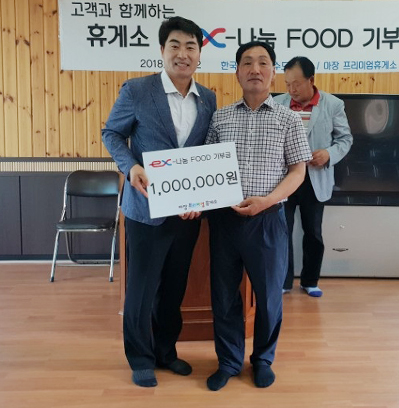 DAEBO Distribution has donated 1% of sales from selected dishes served at its service areas in order to support 'ex-FOOD Sharing', program for the underprivileged in our society.

Seowon Valley Country Club, in cooperation with Table For Two (NGO), has donated KRW 300 per dish purchased by a customer to malnourished children in Rwanda, Uganda, and Kenya. When an elementary school was about to be closed due to lack of students, we offered to run a school bus.

Volunteer work that fills
our minds with renewed hope

The executives and employees of DAEBO Group visit orphanages and nursing homes in local communities every month to do volunteer work.
Not only taking care of the physical and emotional needs of children and elderly people, we hold charity events and donate the profits to orphanages, nursing homes, and facilities for persons with disabilities.
DAEBO Group will continue to develop various volunteer programs and improve our social contribution activities in terms of scope and depth.

New employees of DAEBO Group also
participate in such activities
during in-house introductory program
by delivering coal briquettes
to our neighbors in need.

The executives and employees of DAEBO Communication & Systems visit on a regular basis local Welfare Centers to prepare, deliver, and serve meals, and wash the dishes for neighbors in need. On national holidays such as Chuseok, they visit and deliver rice and instant noodle to senior citizens who live alone and persons with disabilities.

The executives and employees of DAEBO Distribution visit the disadvantaged in their local communities or invite them to the highway service areas to offer meals. 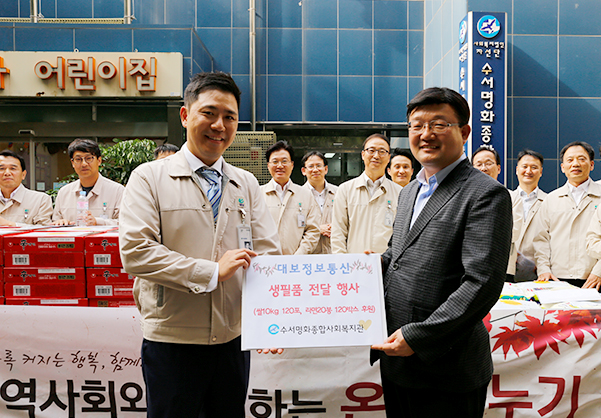 Overseas
Seowon Valley Country Club, in cooperation with Table For Two (NGO), donates KRW 300 per dish purchased by a customer to underfed children in Rwanda, Uganda, Ethiopia, Kenya, and Tanzania.